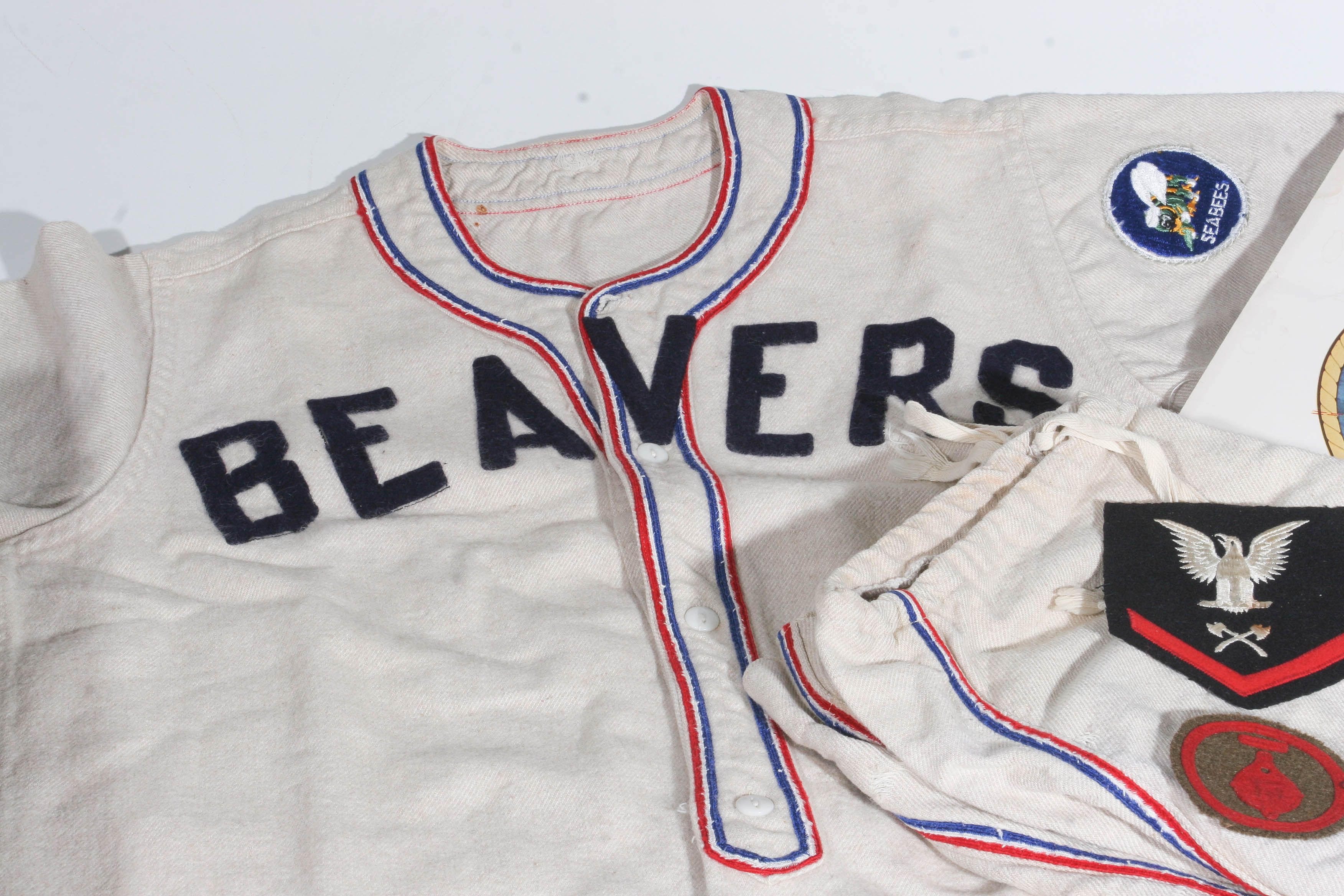 Growing up in Lynn more than a half-century ago, Rudy Mattogno never played in the majors, or at any professional level, but that didn’t keep him out of the National Baseball Hall of Fame.

Read this one too Military Baseball Caps Wholesale.

Mattogno served in the US Navy during World War II. He died in 1989, and it wasn’t until 23 years later that his brother-in-law discovered an unlabeled box in Mattogno’s Topsfield home. The box was handmade by Mattogno, a carpenter by trade.

Inside the box, James Dincecco found an old baseball uniform in near-perfect condition. The team name “Beavers” was stitched across the chest in navy blue letters, and a Seabees patch was sewn on the left sleeve. The Seabees name is derived from C-B, or construction battalion, which suggested to Dincecco that this jersey was a keepsake from his brother-in-law’s years in the war.

Digging deeper into the box, Dincecco found a ball, also in pristine shape, with several names etched in pen on the ivory white cowhide. He then discovered a medallion hanging from a chain with 41st CB and “Mattogno” inscribed on the back.

And now they’re in Cooperstown.

Mattogno’s old uniform and other WWII-era artifacts were accepted into the archives of the National Baseball Hall of Fame.

The items will help tell the story of when the nation’s pastime was played by American troops around the world.

“We’re always looking for military and baseball-related pieces, so this was certainly special for us,” said Susan MacKay, director of collections for the Baseball Hall of Fame.

The long journey began years ago, when Dincecco was cleaning out the Topsfield home after his sister, Joan, had died.

He wasn’t sure what to do with these things, but he knew they were valuable.

A few years later, Dincecco met up with an old friend from Lynn, Charlie Johnson, who now lives in Arizona.

Dincecco knew his friend was a collector with a passion for history. When he showed him the box of keepsakes from the war, Johnson lit up.

“He told me, ‘This is going to be a find like you can’t believe,’ ” Johnson said.

Dincecco told Johnson that he could take the box home with him.

“I have a lot of stuff at my house, and my wife, and I don’t blame her, she says, ‘Charlie, you have way too much stuff,’ ” Johnson said.

After a few weeks, Johnson still had the jersey, ball, and medallion on his mind. He called Dincecco and asked if his offer was still on the table. It was, and a short time later a package arrived at Johnson’s home.

A year passed before Johnson called Dincecco with an update. He’d learned that Mattogno had begun active duty in February 1943, just eight days before his 20th birthday. He was stationed around the Pacific during the war, first in Guam and then later in Alaska.

Johnson wondered what to do with the historic materials.

“I started thinking that this should go in a museum,” he said.

He called his brother-in-law, Chuck Colantuno, a longtime baseball umpire from Marblehead who had retired to Florida.

“Charlie called me and told me what he had, and he said he wanted to give it to someone who would appreciate it,” Colantuno said from his home in Ocala. “I thought about it and figured we might as well start at the top.”

That’d be the National Baseball Hall of Fame.

Colantuno wrote up an e-mail describing the uniform, ball, and medallion and their condition. He didn’t expect to hear back, he said, but within a day he had a response from MacKay at the Baseball Hall of Fame.

MacKay asked Colantuno for pictures, and a few months later she asked if the items could be sent to Cooperstown. Another two months passed, and in the fall MacKay reached out to Colantuno again, this time to tell him they’d accept the uniform, ball, and medallion for their collection.

The Hall of Fame has been building its collection since 1937, MacKay said, and not all submissions are accepted. An acquisitions committee decides if pieces should be added to the collection. The condition and rarity of the keepsakes left behind by Mattogno caught the committee’s eye, MacKay said.

“It’s certainly rarer than most of the items we are offered,” she said.

MacKay said the pieces will be kept in climate-controlled storage. They could be on display someday if the Hall of Fame opens an exhibit on baseball in the military. MacKay said they last did such an exhibit in the 1990s.

Dincecco said it’s a shame Mattogno isn’t here to see his old uniform reach the Hall of Fame. Mattogno died Sept. 22, 1989, at age 65 from lung cancer. Dincecco said Rudy and Joan Mattogno did not have children.

After he was honorably discharged from the Navy in January 1946, Mattogno worked as a maintenance employee for the Boys Club of Lynn (now the Boys & Girls Club).

Around 1979, he began working for General Electric as a carpenter and retired in the mid-1980s, Dincecco said. He’s glad his brother-in-law’s memory will be preserved along with his old uniform and the other pieces being kept by the Hall of Fame.